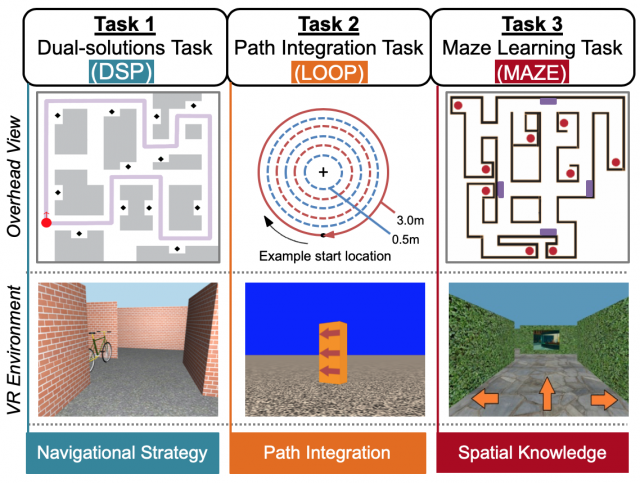 This project brings together an interdisciplinary team of experts in neuroscience, endocrinology, spatial cognition, and navigation. Combining fully immersive virtual environments and state-of-the-art brain imaging technologies, we are examining the effects of chronological and reproductive aging on spatial navigation ability and the neuronal systems that compute spatial information.

Navigation ability has emerged as a promising early marker of neurodegenerative disease. Young adults at a heightened genetic risk for Alzheimer’s have reduced navigation performance and altered neural activity while performing navigation tasks, decades before onset of disease symptoms. Given that women have a higher frequency of dementia, applying a sex difference lens to the study of the aging brain is critical for identifying early antecedents of future cognitive decline.

Sex differences in spatial ability are evident across species, but it is unknown whether age-related changes in humans vary by sex. Further, sex hormones influence navigation strategy and regulate the synaptic organization of core structures within the brain’s navigation circuitry (hippocampus, entorhinal cortex, perirhinal cortex, retrosplenial cortex). However, the influence of sex hormones on navigation has not yet been connected to the sweeping neuroendocrine changes that accompany reproductive aging in humans.

This project is supported by a 2018 CNSI Challenge Grant, a UCSB Academic Senate Grant, and a University of California Regents Fellowship