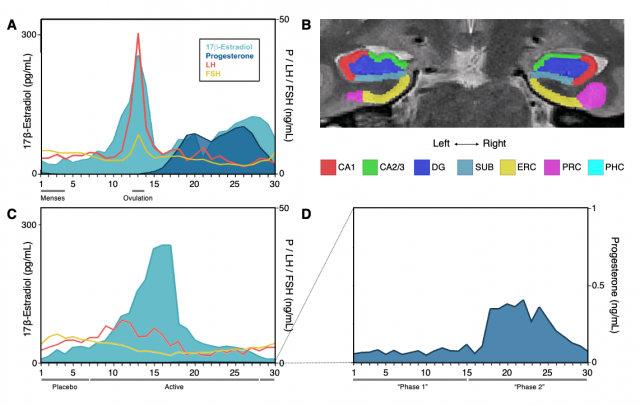 The degree to which female reproductive aging leads to macrostructural changes in human brain morphology, changes in brain connectivity, and ultimately changes in cognitive functioning represents a significant knowledge gap that has yet to be adequately examined.  Ovarian hormone suppression (OHS), a widely used treatment for endometriosis, offers a unique clinical scenario through which to study the impact of estrogen and progesterone changes on the brain and cognition. The treatment allows for the temporary and reversible induction of a postmenopausal-like endocrine status, the effects of which can be observed over the course of a few months, and offers a human analogue of animal studies that have provided substantial evidence for the neuroprotective effects of ovarian hormones and their influence on neural function.

In this study, which launched Fall 2021, we are examining 200 adult women with endometriosis (ages 25 to 40), half of whom will undergo OHS via the gonadotropin releasing hormone (GnRH) antagonist Elagolix, and half of whom will follow a non-hormonal treatment plan, in order to gain critical insights into how the depletion of ovarian hormones impacts the brain and cognition.

The multimodal cognitive neuroscience approach will allows us to model a core aspect of reproductive aging, ovarian hormone depletion, while holding chronological age relatively fixed.  This project will clarify the role of ovarian hormones in shaping brain architecture and cognitive functioning.

This work is supported by the National Institutes of Health (R01 AG063843) and the Hellman Fellows Fund.